Definition of a Thread

A Thread or a Thread of Execution is defined in computer science as the smallest unit that can be scheduled in an operating system. Threads are normally created by a fork of a computer script or program in two or more parallel (which is implemented on a single processor by multitasking) tasks. Threads are usually contained in processes. More than one thread can exist within the same process. These threads share the memory and the state of the process. In other words: They share the code or instructions and the values of its variables.

There are two different kind of threads:

Kernel Threads are part of the operating system, while User-space threads are not implemented in the kernel.

In a certain way, user-space threads can be seen as an extension of the function concept of a programming language. So a thread user-space thread is similar to a function or procedure call. But there are differences to regular functions, especially the return behaviour.

Every process has at least one thread, i.e. the process itself. A process can start multiple threads. The operating system executes these threads like parallel "processes". On a single processor machine, this parallelism is achieved by thread scheduling or timeslicing.

The handling of threads is simpler than the handling of processes for an operating system. That's why they are sometimes called light-weight process (LWP) 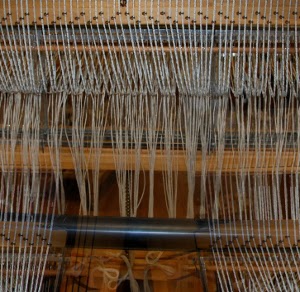 There are two modules which support the usage of threads in Python:

Please note: The thread module has been considered as "deprecated" for quite a long time. Users have been encouraged to use the threading module instead. So,in Python 3 the module "thread" is not available anymore. But that's not really true: It has been renamed to "_thread" for backwards incompatibilities in Python3.

It's possible to execute functions in a separate thread with the module Thread. To do this, we can use the function thread.start_new_thread:

This method starts a new thread and return its identifier. The thread executes the function "function" (function is a reference to a function) with the argument list args (which must be a list or a tuple). The optional kwargs argument specifies a dictionary of keyword arguments. When the function returns, the thread silently exits. When the function terminates with an unhandled exception, a stack trace is printed and then the thread exits (but other threads continue to run).

Example for a Thread in Python:

The raw_input() in the previous example is necessary, because otherwise all the threads would be exited, if the main program finishes. raw_input() waits until something has been typed in.

We expand the previous example with counters for the threads.

The script above doesn't work the way we might expect it to work. What is wrong?

The problem is that the final while loop will be reached even before one of the threads could have incremented the counter num_threads.

But there is another serious problem:

The problem arises by the assignments to num_thread

These assignment statements are not atomic. Such an assignment consists of three actions:

Errors like this happen in the case of increment assignments:

The first thread reads the variable num_threads, which still has the value 0. After having read this value, the thread is put to sleep by the operating system. Now it is the second thread's turn: It also reads the value of the variable num_threads, which is still 0, because the first thread has been put to sleep too early, i.e. before it had been able to increment its value by 1. Now the second thread is put to sleep. Now it is the third thread's turn, which again reads a 0, but the counter should have been 2 by now. Each of these threads assigns now the value 1 to the counter. Similiar problems occur with the decrement operation.

Problems of this kind can be solved by defining critical sections with lock objects. These sections will be treated atomically, i.e. during the execution of such a section a thread will not be interrupted or put to sleep.

The method thread.allocate_lock is used to create a new lock object:

We want to introduce the threading module with an example. The Thread of the example doesn't do a lot, essentially it just sleeps for 5 seconds and then prints out a message:

Method of operation of the threading.Thread class: The class threading.Thread has a method start(), which can start a Thread. It triggers off the method run(), which has to be overloaded. The join() method makes sure that the main program waits until all threads have terminated.

The next example shows a thread, which determines, if a number is prime or not. The Thread is defined with the threading module: 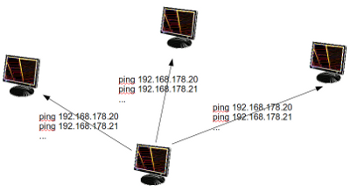 The previous examples of this chapter are of purely didactical interest, and have no practical applicability. The following example shows an interesting application, which can be easily used. If you want to determine in a local network which addresses are active or which computers are active, this script can be used. But you have to be careful with the range, because it can jam the network, if too many pings are started at once. Manually we would do the following for a network 192.168.178.x: We would ping the addresses 192.168.178.0, 192.168.178.1, 192.168.178.3 until 192.168.178.255 in turn. Every time we would have to wait a few seconds for the return values. This can be programmed in Python with a for loop over the address range of the IP addresses and a os.popen("ping -q -c2 "+ip,"r").

A solution without threads is highly inefficient, because the script will have to wait for every ping.

To understand this script, we have to look at the results of a ping on a shell command line:

If a ping doesn't lead to success, we get the following output:

This is the fast solution with threads: