Long before biologists started their research of cloning, computer scientists had a successful history of cloning. They cloned processes, though they didn't call it cloning but forking.

Forking is one of the most important aspects of Unix and Linux. When a process forks, it creates a copy of itself. More generally, a fork in a multithreading environment means that a thread of execution is duplicated, creating a child thread from the parent thread. They are identical but can be told apart.

In computer science the term fork stands for at least two different aspects: The system function call fork() creates a copy of the process, which has called it. This copy runs as a child process of the calling process. The child process gets the data and the code of the parent process.

To be able to fork processes we need to import the os module in Python.

So far we have called functions in our examples which are defined in the same script file.

Forks are often used to start independent programs. To do this we need the exec*() functions.

They execute a new program by replacing the current process by this program. They do not return to the program which has called them. They even receive the same process ID as the calling program.

The exec*()-Funktionen are available in various formats:

We will explain these functions with examples, because they are hardly explained in literature.

We will use a bash shell script, which we save under test.sh in the directory /home/monty/bin2 To understand the following examples it's only necessary that the script test.sh is not included in a directory which is included in the PATH (the environment variable $PATH of bash). test.sh has to be executable:

The Python script execvp.py, which calls our script test.sh, is saved in a different directory, e.g. /home/monty/python:

As test.sh can't be found in any of the $PATH locations, we get an error message, if we call execvp in a command line:

To prevent this error message, and to achieve that our shell script is called, we extend the PATH environment variable with the directory which contains test.sh, in our case /home/monty/bin2:

If we save this script under the file name execvpe.py, we receive the following output, if we call it:

The value of the shell environment variable $PATH is replaced by the new value of our dictionary. If you want to avoid this, i.e. if you want to new directory to be appended to the existing path "PATH", you have to change the code like this:

It's possible to use execlpe() instead of execvpe(), but the code of our Python script has to be changed in the following way:

Overview of the exec Functions 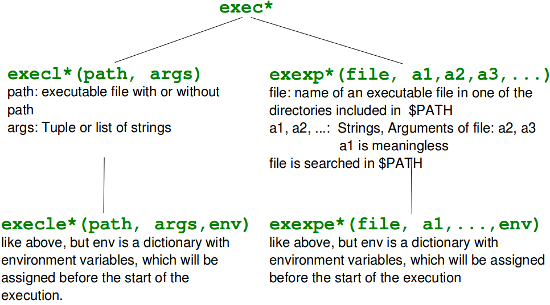